Trophies are awards given primarily for academic, work, and sport contests or events. They are physical evidence that one person or group has bested another in some contest. They are tangible evidence of prowess and have extraordinary meaning for their recipients. They're proudly displayed in homes and schools.

Trophies range from inexpensive to almost priceless. They can be unique, like the one-of-a-kind Stanley Cup awarded to each year's National Hockey League's champion, or mass-produced, molded plastic figures costing less than a dollar. Each is considered a treasure regardless of its monetary value.

Once of metal atop a wooden or metal base, many trophies are now made of molded plastic colored to resemble gold, silver, or brass. Trophy parts are manufactured within a factory but assembled by award dealers (retailers) who sell to the public. As a result, there is an astonishing array of parts that may be purchased, allowing the retailer to build an award to meet every customer's needs. For example, trophies may be purchased with silvertone, goldtone, or clear plastic figurines; and with marble-like or wood-like bases.

Trophies are less expensive and awarded more frequently, thanks to manufactured plastic trophies. In addition to having a variety of figures from which to choose, trophies are of three primary forms: the clear plastic action figure crowning the base, the gold-colored or silver-colored action figure atop the base, or a rectangular plinth of plastic that is holographically decorated by computer with words or graphic of the event, equipment, or sport scene and placed on the plastic base.

Trophies are produced almost exclusively from plastic; one custom glass trophy may include several different types. Hot-stamp metallic foils are pressed into the columnar shafts to impart to give the figurine metallic color. Gypsum is inserted into the base and metal studs are molded into the trophies to give them strength. 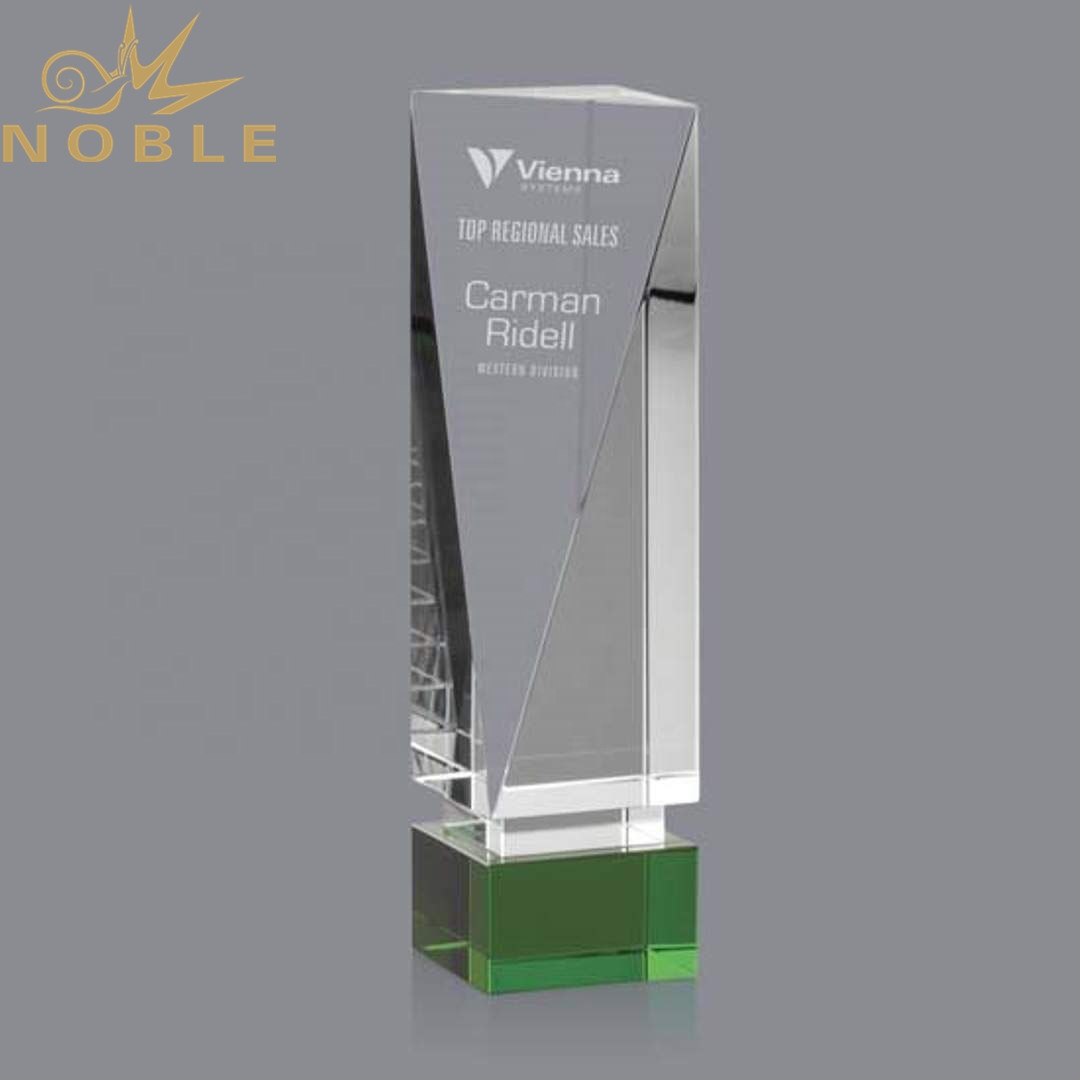 A trophy is not designed as an entire piece; instead, it is broken into several components that are designed and redesigned; an assembler then chooses individual components to make a trophy. First there is the base upon which the entire trophy sits. This is often plastic made to look like marble or wood. Bases are generally categorized as crescent, sculpted, tiered, or a specialty form. Next comes the column or columns. These are the vertical piece or pieces on which the figurine may rest, or they may hold yet another tier upon which the figurine sits. These are often plain metal, imitation marble, or holographs. Next comes the riser, a small, decorative element that sits upon the base and between the columns. The riser may indicate the recipient's position: first, second or third. Some trophies have another tier atop the columns upon. Finally, on top of everything, comes the figurine.

One large trophy manufacturer describes their design process as four-part: talking to customers, brainstorming new ideas, producing the idea visually or physically, and then executing some models for testing. First, the new products division talks to consumers. They gather ideas on what components are popular, changes that might be made, figurine needs not reflected in the current catalog, etc. Customer opinion is gathered through market research and focus groups. Then, new product developers articulate these needs and also brainstorm possibilities for redesigned components. The most promising ideas are discussed with a team of developers who can help make the idea real.

The appropriate material is chosen for the component based upon durability and its intended function (e.g., support or decoration) on the trophy. The new design is then carefully assessed by a committee that scrutinizes it for design aesthetic, manufacturing difficulty, tooling needs, durability, and decoration. If there is a problem in any of these areas, the part is returned for reassessment. Of particular concern is ease of manufacturing. Reassessment and adjustments may take up to four weeks alone. Once final approval is receive

Once final approval is received, the new part is ready for mass-production.

Different parts of the trophy are produced in different ways. The components are either molded using steel dies, or extruded through a die using pressure and some heat. Most of the parts, including the risers, base, and figurine, are injection molded. To mold a plastic part, an automatic feeder system is fed a continuous stream of plastic pellets. The trophy bases, risers, and figures are molded using extraordinary pressure against a die in a process known as extrusion.

The trophy bases, risers, and figures are molded using extraordinary pressure against a die in a process known as extrusion.

The molding machine is fitted with very expensive specially designed steel dies. The machines melt the pellets into a liquid and, using extraordinary pressure against the dies, form the custom trophy bases, risers, and figures. The dies form between up to 12 components of a single design per cycle. The machines are operated by a worker who oversees the production. A metal stud is inserted into the body of each of these figures to ensure the strength of this component as parts of the figure (ankle, wrist, neck) may be of thin plastic and subject to breakage. One of the largest manufactories of trophy parts runs 40 such molding machines six days a week, three shifts a day.

Bases must then be filled with gypsum to give the base a proper weight without using too much brittle plastic. Figurines that are not to be given a silver-or gold-tone finish are essentially done and are pushed through the machine and out, ready to be assembled at the retailers.

Figures that are to receive a metallized finish are put operator onto the hot stamp foil machine. The plastic figures are washed with a top coat, then metal foil (which comes in 54-in (1.4-m) wide rolls and comes off in linear feet) is heated and pressed onto them. Those parts that are to be colored as well as metallized are decorated in a similar fashion. The figures are now moved away from the machine, ready to be boxed and shipped to assemblers.

The columns are form from plastic pellets that go into a machine, melted, then forced (extruded) through a formed die. As they go through the die they're cut to the required length. These, too, then move away from the machine ready for boxing. made of extruded plastic

The components are automatically bagged and boxed by a machine and ready for shipment to the assemblers.

Precision machinery, including the steel dies, are inspected, maintained, and cleaned regularly to insure the production of accurate, high-quality parts. All materials, from the rolls of metal foils to the various plastics used in production, are approved upon arrival at the factory. Once the trophies have been assembled, a series of inspectors check them as they come off the line, looking for unacceptable variations in the molded parts or improper color or foil application.

Parts that do not pass quality inspection are sorted by plastic type and applied color, then reground for use at a later time in another product or component. Important parts like the figures and clear vinyl or acrylic plinths for specialty trophies, however, are made of new materials only.

Plastic molding and extruding machines do kick up a certain amount of ambient plastic materials. Air scrubbers are used inside such factories. Water ejected from such plants may contain effluvia and plastic molding companies reclaim and clean the water from the plant.